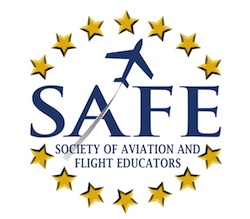 I recently attended a two-day event where the Society of Aviation Flight Educators (SAFE) chaired a landmark gathering of major general aviation stakeholders to discuss lack of growth, decreased student start, increased student attrition, and flat accident rate trends vis-à-vis our current flight training system. This meeting was organized because of a study by AOPA, The Flight Training Experience, that showed some alarming statistics; approximately 80% of the people who begin aviation training stopped their training either prior to obtaining their private pilot certificate or shortly thereafter; student starts in aviation training are down by 60%; and Private Pilot Certificates issued are down by 75%. In addition, despite all of the advances in technology, the general aviation accident rate is essentially the same as it has been for the last 10-20 years.

Of the 154 individuals present at this symposium, each expressed individual concern for a particular area that required attention. The SAFE leadership then formed and placed individuals into one of six groups. These groups were organized to examine six areas of concern and were chaired by highly experienced individuals:

Day one, Wednesday, the attendees listened to each group as they presented a vision for their piece of the pie. A working lunch was held were the keynote speaker was Mel Cintron, Manager FAA General Aviation and Commercial Division (AFS-800). He shared the FAA’s five-year plan to improve the safety record in general aviation. In addition, Van Kerns, Manager FAA Regulatory Support Division (AFS-600) added his division’s support of the findings of the SAFE symposium. Both acknowledged that the FAA cannot make the changes, but needs the support of the community as a whole to ensure that safety is improved.

Day two, Thursday, the groups were let loose to work on their particular area of concern and then report on the top five findings that required immediate attention. During our working lunch on Thursday, Bob Stangarone, Vice President of Corporate Communications, Cessna Aircraft talked about the Importance of Training to Safety, Product Success, and Industry Growth.

On Thursday, I was privileged to participate in Group 5 where we examined and made suggestions to improve Flight Training Curricula with hopes of stemming the decline in student pilot starts and continued training. This was a challenge because there were recommendations for both the instructor and student curricula; to change one meant a necessary change to the other. Our group targeted five areas, among many other areas of discussion that needed immediate attention given the state of general aviation. These are in no particular order. First, a focus, beginning on day one, on teaching risk management using scenario based training. The reason was simple; risk analysis has been identified as a weak area in aeronautical decision-making. Second, if students need to be taught how to “do” risk analysis, then instructors need to learn how to teach it. This area needs more attention in the CFI curriculum. Third, a focus on more advanced concepts of aerodynamics, namely angle of attack (AOA), load factor, and speed. Ideally adding an AOA indicator in aircraft would allow students to understand aircraft performance a little better. Fourth, the implementation of a Continuing Professional Education (CPE) for instructors, much like other professions (e.g., physicians, etc.) would ensure CFIs remain up to date on many areas related to aviation instruction. And lastly, the need to create better guidance for the use of simulation in training, as well as, providing credit for the use of training devices in student training. These are only a few of the suggestions that went forward for consideration and action.

As reported by AVweb here are just a few of the recommendations that came from the groups:

After the reports from the groups in the afternoon, the Honorable J. Randolph Babbitt, Administrator, Federal Aviation Administration presented a keynote address to the audience about Meeting the Training Challenges of the Second Century of Flight. In addition he touched on the importance of education rather than on training where education implies more than the ability to do something, but to understand everything related to that task. He also noted that professionalism is about being a good aviation citizen, one who includes the interests of others in the everyday decisions in the aviation business. Part of being a good aviation citizen is operating by a Moral Code of Conduct. A copy of the Aviators Model Code of Conduct (AMT, Glider, Sport, Seaplane, Student) and Instructors Code of Conduct can be found at the AMCC website. He also reminded the audience of the new Advisory Circular, AC 90-109 Transition to Experimental or Unfamiliar Airplanes, where owners and instructors alike are given suggestions on improving safety in both experimental and unfamiliar aircraft. An audience member asked Administrator Babbitt his opinion on (H.R. 5900) the 1500 hour rule for new hire first officers in Part 121 operations and he stated that he does not accept that total time is a proxy for experience; it’s about the training received. All in all, it was enlightening and refreshing to hear from the Administrator about his support for GA in the United States and the efforts of the GA community to improve safety.

Overall, the energy and enthusiasm for making change and the cooperative effort of both the FAA and the Aviation Community is good. Several areas for improvement were identified, as well as who owns the responsibility for making changes and a recommended timeline for implementing these changes. This process will not be quick, but as more information becomes available, I will post it to keep you in the loop. I am personally encouraged by the work that was done at this symposium. I look forward to the recommendations that come from the various groups and hope we can come together as an aviation community, setting our loyalty’s aside, and work to improve the safety rates, increase student starts, reduce the student dropouts, and grow the overall GA community involvement and support by the citizens of the US. I also hope that the buy-in to the recommendations by the instructor force will be exceptionally high. After all, if these recommendations are not adopted by the front-line educators, then they are all for naught.